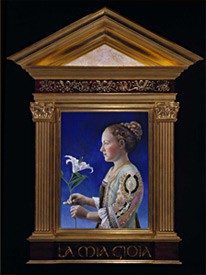 The following is a visual recording of the process used to create this egg tempera portrait of my daughter, Kerri-La Mia Gioia.

This sequence follows the development of Becca (Sundial), 2006, from its concept through to its finished state.

This tutorial, which also utilizes Cennini’s techniques for developing flesh tones on a green underpainting, was originally published in the July/August 2006 issue of American Artist Magazine.

Another larger painting in the Flower Icon series.

Another in the Flower Icon Series…Smith Tulip, E

This summer while teaching a workshop at Whidbey I

I am delighted and honored to have my tempera pain

The fine people at Karst Stone Paper sent me one o